"...changed my entire view of religion and God."
"I feel like a thousand pounds has been lifted from me." 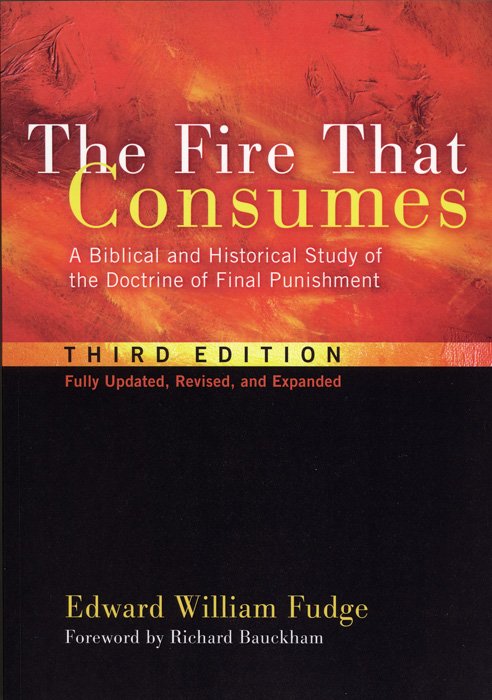 The Fire That Consumes

What is the fate of the lost? Believers are increasingly questioning the traditional view of an eternally burning place of torment, finding it unbiblical and inconsistent with God's own character. This internationally acclaimed book investigates the teaching of Scripture and history on the topic of final punishment, and concludes that hell will involve the irreversible destruction of body and soul, leaving room for whatever degree of conscious torment God justly decrees in any individual case. An Evangelical Book Club Selection.

"I commend this book warmly. It is likely to remain a standard work to which everyone engaged with this issue will constantly return." (Richard Bauckham, Emeritus Professor of New Testament Studies, University of Saint Andrews, Scotland)

"One thing that fascinated me about The Fire That Consumes is the scholarship and the research that made this book possible." (Dr. Claude Mariottini, Northern Baptist Seminary) Read entire review.

"The Fire That Consumes gives the reader the impression that Fudge has left no stone unturned. It is his strong conviction, based on the evidence he has gathered, that what he calls the traditional view of an unending conscious torment for the unsaved is incorrect." (Doreen M. McFarlane, Pastor, The Flagg Road United Church of Christ, West Hartford, CT) Read entire review.

Will God finally keep millions of men, women, and children alive forever in a place resembling a fiery furnace? Will God torment them endlessly throughout all eternity? Is this the God by whose own character "holiness," "mercy," and “justice" are defined?

Is it possible that the view of hell as conscious everlasting torment is not the teaching of the Bible after all?

Edward Fudge believes that a careful study of the Bible from cover to cover shows the traditional view of hell to be wrong. Between the two extremes of everlasting torment and universal salvation, he sets out a third view, more biblical, he argues, than either of the others.

"In Hell A Final Word: The Surprising Truths I Found in the Bible, Fudge steps onto the stage of this discussion as a maestro--a master director. In fact, if Fudge's scholarly, 500 page work The Fire That Consumes: A Biblical and Historical Study of the Doctrine of Final Punishment was like Beethoven's 5th symphony, his latest project is like 'Ode to Joy.'" (M. Smith on amazon.com)

"Edward Fudge challenges the traditional views of hell and punishment by comparing all the biblical contexts dealing with the fate of the lost, and by allowing the Bible itself to define the terms used in these contexts. What emerges is a very different picture that rings of truth rather than medieval superstition." (Elizabeth McEwen on amazon.com)

"Fudge presents a comprehensive argument for the ultimate extinction of the wicked rather than eternal torment. Anyone who has interest in the topic of hell will find much in this book for discussion and thought." (bookwomanjoan on Christianbook.com)